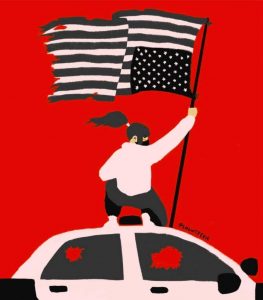 San José Arts Advocates (SJAA) is a collaborative project dedicated to education, advocacy, and action to support arts and culture. Among our key goals are to amplify the political voice of San José’s creative community and provide opportunities for learning, networking, and collaboration. It is in that spirit that we approached the virtual community meeting hosted by the City entitled “When Art Provokes: Sharing and Learning from Community Views About Public Art”. Based on the title and framing of the event, we anticipated a wide-ranging conversation around public art programs and processes in San José. Instead, more than two hours of discussion centered around a single piece of public art, the statue of Thomas Fallon, which as noted during the forum has incited a good deal of controversy in the three decades since it was originally commissioned. While we appreciate and encourage a robust public conversation regarding public art, we are dismayed that equal consideration was denied to the Holding the Moment exhibit, including Eric Bui’s AMERICANA, at Mineta San José International Airport (SJC).

SJAA believes in a public process for the installation and deinstallation of any and all public art projects, in our city or anywhere else. For that reason, we were pleased to see the City Council call for such a process with regard to the removal of the Fallon statue. We look forward to engaging in this process. However, this call rings hollow in the context of a unilateral decision by the City Manager to prematurely remove the first Holding the Moment exhibit, including AMERICANA and the work of 15 other San José artists. This abrupt and unplanned removal followed complaints from local law enforcement and a handful of social media posts. In fact, the avalanche of attention paid to the Fallon statue both during the City’s forum and afterwards in your Medium blog, and the relative dismissal of Holding the Moment serve as a pointed reminder that a double standard exists for public art in San José — one based primarily on who raises an objection.

During the City’s forum as well as an online panel discussion hosted by SJAA on January 21, Deputy City Manager Kim Walesh did her best to explain the early deinstallation of the exhibit. According to Ms. Walesh and a memo from her direct supervisor, City Manager David Sykes, there were concerns from “some employees, the Police Officers Association, and members of the public” that AMERICANA “could be seen to encourage violence against police.” The response was to remove the artwork the following morning, with little or no notice or explanation provided to the artists involved, not to mention the selection committee, Public Art Committee, the Arts Commission, or the City Council. As noted in Mr. Sykes’ memo, the exhibit had exceeded the “month” of display promised to the artists – though it was taken down 3 days prior to the publicly published end date. Mr. Sykes also noted that the exhibit remains available in a digital gallery on the City’s Office of Cultural Affairs website. Both of these caveats are irrelevant to the underlying point: While it took three decades of valid and passionate protests from a cohort of community members for city leaders to even consider removing the Fallon statue from public view, the work of Mr. Bui and his 15 fellow artists was removed — and effectively censored — in less than 24 hours. If we are to truly engage on critical issues and learn how to move forward as one community, the rules of engagement must be coherently defined and consistently applied.

SJAA respects the role that police officers play in maintaining the safety of our community, but we also acknowledge that this role has been and continues to be plagued by deep-seated and institutionalized brutality, violence, and bigotry that disproportionately targets our black, brown, LGBTQ+, and other marginalized and underrepresented neighbors. As you wrote in your blog:

“This is the moment in our history for difficult conversations, particularly about race. I’ve participated and heard many of those difficult conversations, and anger is righteously expressed by community members whose families have endured generations of impacts of systemic racism in our national and local institutions. This moment calls for many of us who have not suffered from that oppression to see with different eyes, and to hear with different ears.”

We would argue that this sentiment should apply to the individuals who objected to Mr. Bui’s work, just as much as those of us who come from privilege and occupy positions of power in the city that we call home. Again, to quote your own words:

“In a representative democracy, we must decide to erect or take down public statues through transparent, inclusive public processes, not on the whim of a few individuals equipped with a truck and a rope.”

Replace the word “statues” with “art” and the phrase “truck and a rope” with “Twitter account”, and you could just as easily be writing about AMERICANA and the 15 other artworks removed from the Holding the Moment exhibit.

For his part, Mr. Bui and his fellow artists have been more than accommodating — and even conciliatory — in their responses to the censorship of their artistic expression after a thorough public review encountered no resistance whatsoever to AMERICANA or any other work being selected for the Holding the Moment exhibit. In point of fact, all of these works received a unanimous vote of support from you and the City Council. We applaud Mr. Bui for his professionalism, and we appreciate the efforts of the Office of Cultural Affairs to give San José artists an opportunity to have their work displayed in public spaces — and to pay them for their time and their craft. But as arts advocates, we refuse to sit idly by while these same artists are treated with such disrespect.

With that in mind, SJAA calls on the City of San José to:

Taking these corrective actions will not only allow the general public to fully understand why this incident occurred, it will help to assure local artists that the public art process in San José is worth investing their time and energy, especially in the wake of the ongoing pandemic, when they are already struggling to pay the rent and put food on their tables.

We look forward to engaging with you further on this matter.

[ADD YOUR NAME TO THIS LETTER]